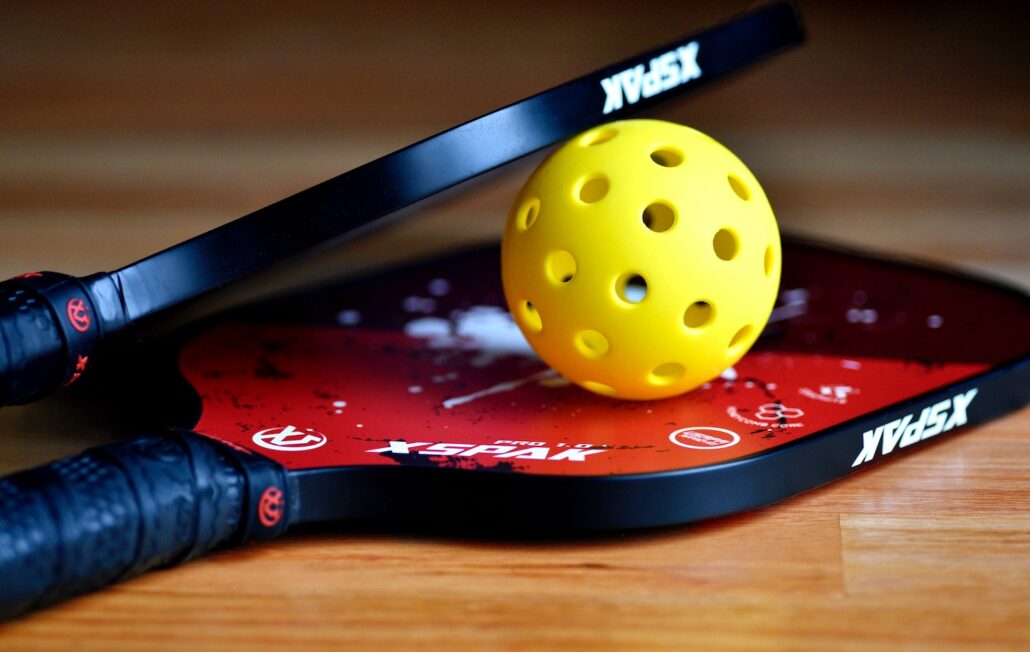 How to Play Your Parents’ Favorite Game:

Campus View has a BIG announcement this month… but it’s not the ordinary craft corner or trivia competition we love to tell you about. Our recreation staff have been cooking up a fun idea to get the community involved in a different type of competition, and it couldn’t be easier. Here’s the scoop: our gym now features a regulation sized Pickleball court! The game that has swept the nation by storm is now offered in your very own backyard. If you’ve heard chatter about the sport, you may have heard that the rules can be a little tricky. Have no fear! The rules are a lot simpler than you could imagine.

Games are normally played to 11, win by 2, with points being scored by the same methods as Tennis: if a ball does not cross the net, bounces twice on your side, or falls outside the lines—the opponent gets a point.

The only difference with Pickleball is that points are only awarded to a team who scores when they serve. Scoring while the other team is serving gets you control of the serve, and makes it so they cannot score until they have regained control of the ball.

This makes Pickleball a game of runs, and adds a lot of intensity down the stretch. Maintaining momentum is key, and strategizing with your partner is definitely a way to gain it.

Your serve must pass the 7 foot “non-volley zone” (AKA “The Kitchen”) in front of the net and land in the diagonal service box. This makes it very similar to a tennis serve.

After the first two returns, you are now able to hit the ball out of the air. This means that, from this point on, one of the most viable strategies is to charge the net and either give the ball a little love-tap or hit it with an overhead smash. Either way, from this point on it is important to know the rules of “The Kitchen”

The Kitchen is the box made by the line between the net and the service line. During the opening, if you hit the ball into the opponent’s box, it’s their point. After the opening, You cannot enter The Kitchen, unless the ball bounces inside of it.

If someone steps into the non-volley zone, feel free to yell at the other time “stay out of the KITCHEN!” This is a way to establish dominance and intimidate your opponents.

One of the biggest advantages in Pickleball is a familiarity with the racket mechanics in tennis. Knowing how to hit a forehand and a backhand, to put a little backspin or topspin on the the ball when you want to, is a huge advantage over an opponent who is just thwacking at the ball and hoping it lands inbounds.

However, the small size of the court and the importance of teamwork also rewards aggressive play. If you’re more of a power hitter than a finesse player, you can just charge the net and pray they don’t get it past you. Plus, if they do, then a good partner will still have your back.

So, now that you’ve got the basics, it’s about to go down, y’all. If you have any more questions about the rules, make sure to visit the official Pickleball website (linked below this post). Happy playing, Campus View. See you on the court!

Add a little spice to this cold winter day with ou

Have you ever wanted to learn how to crochet or kn

Make sure to sign a lease with Campus View before

Donuts with Don is back again this week‼️ Take

Schedule a virtual or in person tour. Or, just stop by during business hours, no appointments required.